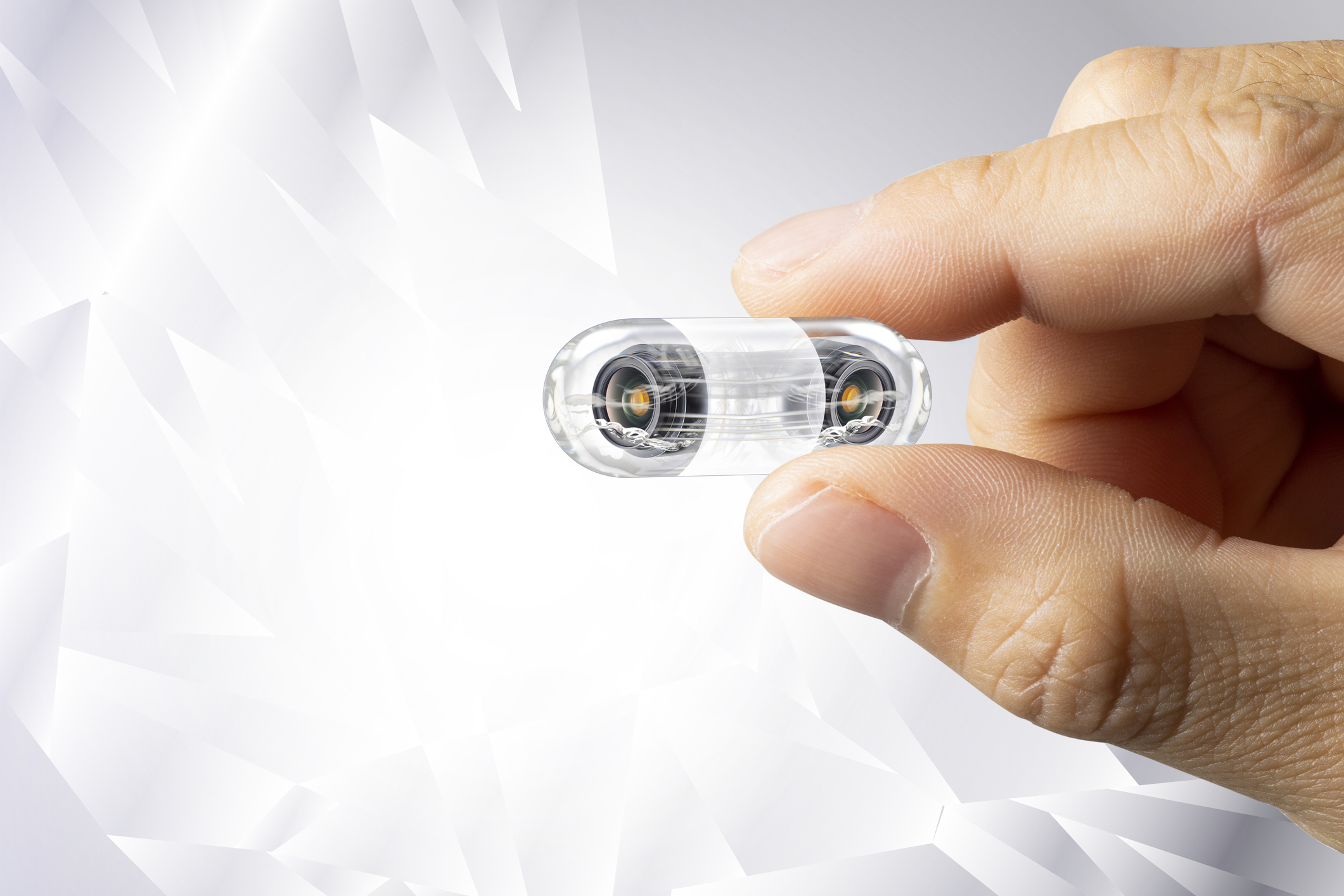 A disposable camera that’s small enough to swallow and powerful enough to help rule out bowel cancer. And it could be coming to a clinic near you.

Last month, NHS England announced a pilot programme that will offer some people with potential bowel cancer symptoms a colon capsule endoscopy, instead of the more invasive colonoscopy test. It’s a small pilot at the moment, with 40 centres signed up and 11,000 pill cameras available. And it’s not the first.

A team in Scotland has been investigating this tiny technology since 2018, with hospitals in some parts of Scotland beginning to use the test in 2020.

We spoke to them about what they’ve learnt so far.

A pill with potential

It all began with a list. An ever-growing list of people waiting for a colonoscopy – a type of endoscopy test used to diagnose bowel cancer, amongst other things.

Something needed to be done.

“I spotted the opportunity and the future potential for using capsule endoscopy to look for bowel cancer,” said Professor Angus Watson, a consultant bowel cancer surgeon at NHS Highland. “I had a vison about the being made so accessible and highly acceptable to patients, that it could change the incidence of colorectal cancer in the UK .”

Colon capsule endoscopy looked like the right candidate. It was already being used in the NHS for people who were unable to have a colonoscopy, but so far it’s use had been limited.

“The technology itself was fairly well evaluated, just not widely used in clinical practice yet,” says Anna Betzlbacher, a national improvement advisor for the Scottish Government. “And what the team did was look at how you could deliver it best – how do you make sure it’s a diagnostic pathway that can be sustainably delivered within the NHS?”

The SCOTCAP team, led by Professor Angus Watson, worked with 3 Health Board areas across the North of Scotland to answer exactly that.

Dr Marilyn Lennon, an expert in digital health and wellness at the University of Strathclyde, worked with Watson on the evaluation. “We needed to not only clinically evaluate the test, but we also needed to test if patients actually like it. And if they’re going to accept it as part of the service.”

Lennon was responsible for the latter. “I evaluated patient acceptance, which thankfully was thought of as really important, which isn’t always the case.”

According to Lennon, teams are often entirely focused on making sure new tests are clinically safe and effective. “And that’s all well and good. But if we find that this is going to radically improve our waiting lists, but all the patients say that it was awful and they would refuse it, then the whole thing falls apart.”

Fortunately, this was not the case for colon capsule endoscopy.

“There were loads of really positive responses around being closer to home, not burdening the family – one person said she didn’t have to get her husband to drive her all the way to Inverness for the test,” says Lennon.

And while the test is a lot less invasive than a traditional colonoscopy, it’s not as simple as it may sound, something that came through strongly in the evaluation .

“It’s not just popping a pill, there’s still a bowel prep, right? It’s still a complicated procedure.” Some people thought they would just be in, out and then they’d get their results. But it wasn’t like that.”

What does a colon capsule endoscopy involve?

The test involves swallowing a small pill that contains a small disposable camera, which travels along your gut and takes thousands of pictures. These are transmitted to a data recorder that you wear on your waist.

Before the test, you’re normally asked to eat a low fibre diet for around 5 days before the test, as well as taking medicine to empty your bowels as part of the bowel prep. You’ll also need to take more medicine on the day of the test to help the camera to pass through smoothly.

Feedback like this was vital for the team. Game-changing in fact. “As part of the test, you’ve got to wear a shoulder bag to allow the photos to be transmitted and stored,” says Lennon. “And early on, there was a bit of negativity around some of the recording equipment, that it was cumbersome, a bit heavy for some people. In response, the company redesigned that and looked at making it lighter.

“Now if you’re doing a clinical trial, it wouldn’t have been possible to change anything until the very end, quite rightly. But we’re reacting to the things that were being said. So for me, that was a small but really amazing example of why this type of real-time evaluation needs to happen in healthcare.”

The team also learnt how important it was to manage people’s expectations, particularly around waiting . “While the test can be delivered quite quickly, someone still needs to take a look at the images , it’s not instant.

“The other thing is if you have the colon capsule endoscopy, you might still need to go for a colonoscopy, depending on the results ,” Lennon adds.

Lennon says that by identifying these niggles at the very beginning, the team could improve the way the service was delivered and hopefully provide a roadmap for other countries who are implementing the technology too.

And while the formal evaluation period is over, the team are still learning.

“We’re really trying to capture patient feedback even though the initial evaluation is over. We have a questionnaire that’s handed out to every patient and two thirds of patients are returning it.”

Betzlbacher says they’re using the feedback to improve the service, for example changing the bowel prep medication people need to take before the test to one with a different flavour and that requires a reduced amount of liquid.

“We’re looking to keep evolving and adapting but I think now we’ve moved into the adoption phase it’s the little things now to make sure the service works and keeps on improving – both from a patient and NHS view – and see how endoscopy teams start to use the new service and learn which patient groups benefit most from the new test.”

Lennon says while subtle, the ongoing evaluation being done through surveys is “genius”.

“In normal life you go to the GP and get a drug or a new armband to wear and that’s fine, it’s just part of the NHS service. But to actually have service evaluation as part of it, that’s amazing – because then you’re giving feedback to the company, to the NHS, to the government on what you liked and what you didn’t.

“To some people that sounds too consumery, but why should we not be able to say what we did and didn’t like about the service?”

Fast. Responsive. Patient-centric. Qualities that anyone would want when it comes to bringing new tests into a healthcare system. The team credit the people and partners involved for their success – made possible through an innovation partnership model that included the company that makes PillCam, the NHS, academic researchers, a company that managed the service and one that designed the software for the service, amongst others.

“Everyone went on the journey at the same time, meaning we could fix what’s not working,” says Lennon. “It’s a brilliant model for trying to get new technologies out.”

Betzlbacher agrees. “The team really started with the endpoint in mind – they started testing out the service model to scale it up and roll it out across the country. And that really enabled us to quickly move from evaluation to roll out.”

The team say this model could be particularly useful for smaller medtech companies, which have sometimes struggled to make inroads with the NHS in the past, by breaking down barriers and making sure the right expertise are there.

“The NHS needs to become more agile – with innovation in its DNA,” says Watson. “By working with med tech companies. the NHS can solve clinical problems but can also create economic health; this has happened in the ScotCap programme. Giving smaller medtech companies direct access to clinicians definitely breaks down the silos.”

“When I first came into this, I was telling people ‘this is a replacement for colonoscopies. It’s brilliant, imagine having this instead of a colonoscopy.’ But very quickly I realised it wasn’t that simple,” says Lennon. “It’s not going to solve everything, but if you can identify the group that are really going to get an advantage then that’s great.”

Why would I have a colon capsule endoscopy?

There are a number of reasons why you may need an examination of your large bowel:

Patients with pacemakers or internal electro-medical devices, or pregnant women should not have this test. Colon capsule endoscopies are not currently available in all Health Boards.

You can find out more about the test on the NHS Inform website.